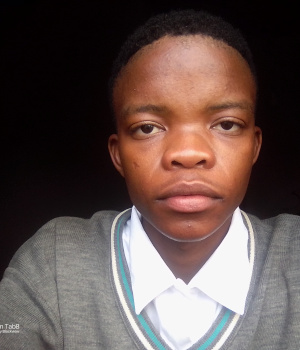 Itumeleng Witness Nkge is a 16 year old self taught programmer living at the North West province. His tech journey started around 2019 when he overhead one of the students at his school saying that he created an app and Witness couldn't believe it and as such, he started researching on the internet whether its possible for someone to create apps, how to create android apps and he researched unitil he managed to create his android app and that's when he believed that it's possible for someone to create apps.

But after finding out its possible to create apps and creating his very first own hello world app, he had no feeling of stopping. H wanted to know more so he continued to research, copy pasting other peoples' source codes, learning from them and creating more simples apps on the AIDE app till his grandpa agreed on buying him a laptop on the 25 of December 2020. So because, he was receiving a laptop on the 25 of the December, he then decided to learn Java from scratch and become 'a permanent software developer'.

After learning the basics of Java on Sololearn app and graduated in a month around 2021, he then created his first official app that teaches mathematics in a month either. The app contained mathematics books from Siyavula including teachers guide for grade 9-12, math quizzes and etc. Afterwards he started partaking on competitions and hackathons such as Africa Teen Geeks afronovate competitions where he created an app that teaches programming in all the official languages of South Africa and won the 2nd place, he also won a bronze medal at Eskom Expo For Young Scientists provincial fairs and made it to the ISF. He was also awarded the rising start award at tadhack 2021 and future geekstar award at Safehack 2021 also graduated at MTN Business App Academy 2021.

For this year he has already created two apps, QnA Maven and Career Maven. QnA Maven is an android app available on amazon appstore using natural language processing to generate answers for asked questions based on context provided and Career Maven is android app available at google playstore assisting learners with their tertiary studies, it provide career guidance to students and etc.

The are people who make a hobby of telling other people what they can do and what they cant do. I've learnt to not listen to those people. - Omar Samra