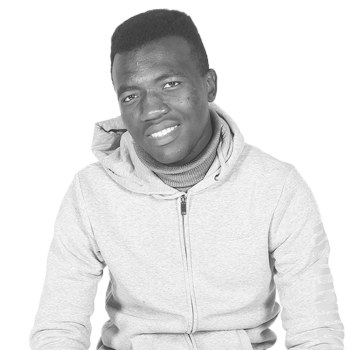 It all started when he was 15 years old doing his grade 10. He didn't know why but he was interested in building his own car . Jeremiah then began selling snacks at school to raise money for the car he had wanted to build. At that time he didn't know what he was doing.

Subsequently, started off by buying palettes of wood and then began building a frame. After building a frame that's when he started budgeting for an engine, but unfortunately his budget was low and could not afford to buy a big engine, so ended up buying a small engine instead.

Having gotten a broken heart after finding out that the engine was too small for the car, he decided to disassemble the car because he had to focus on his books and the car construction was giving him injuries. After disassembling the car, he then decided to build something that was not going to cost him - designing a robot using paper.

It was easier for him to design because he was doing EGD at school and so started gathering boxes and old DVD players to start building the robot. His aim was to make the robot function just like a human being... be able to walk, talk and shake hands. He didn't succeed in making the robot walk after a couple of tries but he told himself that he wouldn't give up without a fight and that he would keep on trying until it's the last thing he did.

The head and arms of the robot could move and that got him so delighted and he felt like people needed to see this and see what he could do. Hence, he made a YouTube channel and got 5 views, and then made a Facebook page and it didn't work out. He did not have the urge to apply at any university when he was doing his matric.

At the end of the year he passed and got 59% for Math & 59% for Physical sciences and that's when he decided to apply for late applications. He applied at TUT and was accepted only to find out that NSFAS didn't immediately fund, and considering that no one is working at home, he had to go back to his drawing board where all his dreams have existence.

That's when he went back to his robots and made another one...a robot that could pick objects and work like a crane. Thereafter, he approached people asking for help but none of them stretched arms for him.

Most believed I was delusional and some were just waiting to see what would happen next. One day I decided to post my content on twitter. Surprisingly it went viral I got a lot of inboxes.

I was called to come to work at WITS tshimologong but was told I would have to volunteer first, because it was in the middle of the year they couldn't  give me an internship. On the other hand I was called at siyafunda CTC and it is near where I stay, so I decided to join the siyafunda team. I am 18 years working at siyafunda as a robotics & coding teacher soon turning 19.

It always seems impossible until it's done - Nelson Mandela

It's not about perfect. It's about effort. Don't try to be perfect. Even the greatest were beginners. The important thing is to start.